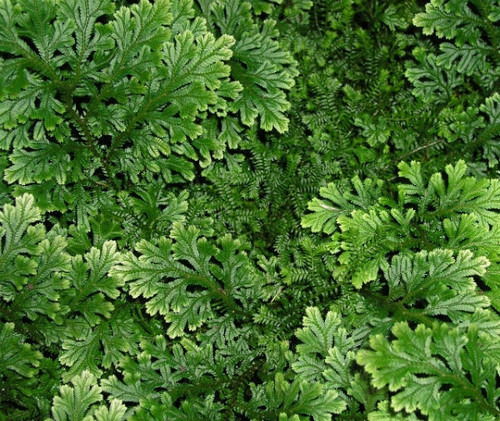 Cypress Spikemoss - Selaginella plana - 4” Pot Softly textured rich green foliage on tall (for Selaginella) upright to arching stems lends this fern ally to mixed containers and hanging baskets where it can spill over the sides. Easy to grow. Prefers high humidity and moist to average humus rich soil. Selaginella is the sole genus of vascular plants in the family Selaginellaceae, the spikemosses or lesser clubmosses. This family is distinguished from Lycopodiaceae (the clubmosses) by having scale-leaves bearing a ligule and by having spores of two types. They are sometimes included in an informal paraphyletic group called the "fern allies". S. moellendorffii is an important model organism. Its genome has been sequenced by the United States Department of Energy's Joint Genome Institute. The name Selaginella was erected by Palisot de Beauvois solely for the species Selaginella selaginoides, which turns out (with the closely related Selaginella deflexa) to be a clade that is sister to all other Selaginellas, so any definitive subdivision of the species leaves two taxa in Selaginella, with the hundreds of other species in new or resurrected genera. Description Selaginella species are creeping or ascendant plants with simple, scale-like leaves (microphylls) on branching stems from which roots also arise. The stems are aerial, horizontally creeping on the substratum (as in Selaginella kraussiana)sub erect (Selaginella trachyphylla)or erect(as in Selaginella erythropus). The vascular steles are polystelic protosteles. stem section shows the presence of more than two protosteles. Each stele is made up of diarch and exarch xylem in centre. The steles are connected with the cortex by means of many tube-like structures called trabeculae, which are modified endodermal cells with casparian strips on their lateral walls.[citation needed] The stems contain no pith. Unusually for the lycopods, which generally have microphylls with a single unbranched vein, the microphylls of Selaginella species contain a branched vascular trace. In Selaginella, each microphyll and sporophyll has a small scale-like outgrowth called a ligule at the base of the upper surface. The plants are heterosporous with spores of two different size classes, known as megaspores and microspores. Under dry conditions, some species of Selaginella can survive dehydration. In this state, they may roll up into brown balls and be uprooted, but can rehydrate under moist conditions, become green again and resume growth. This phenomenon is known as poikilohydry), and poikilohydric plants such as Selaginella bryopteris are sometimes referred to as resurrection plants. Generic division Many scientists still place the Selaginellales in the class Lycopodiopsida (often misconstructed as "Lycopsida"). Some modern authors recognize three generic divisions of Selaginella: Selaginella, Bryodesma Sojak 1992, and Lycopodioides Boehm 1760. Lycopodioides would include the North American species S. apoda and S. eclipes, while Bryodesma would include S. rupestris (as Bryodesma rupestre). Stachygynandrum is also sometimes used to include the bulk of species. Species There are about 750 known species of Selaginella,[9] showing a wide range of characters; the genus is overdue for a revision which might include subdivision into several genera. Better-known spikemosses include: A few species of Selaginella are desert plants known as "resu