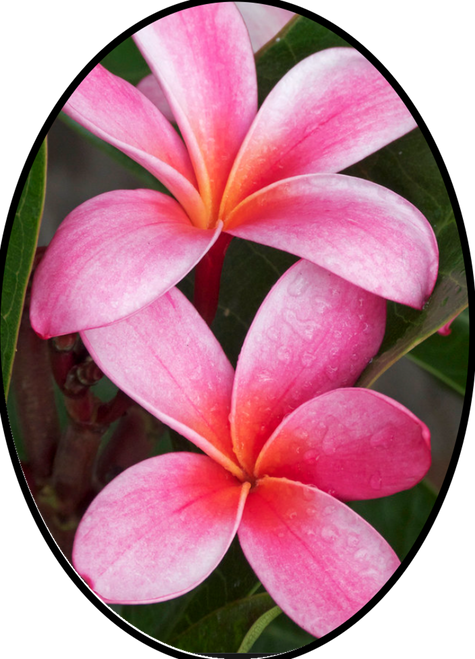 Plumeria rubra is a deciduous plant species belonging to the genus Plumeria. Originally native to Mexico, Central America, Colombia and Venezuela, it has been widely cultivated in subtropical and tropical climates worldwide and is a popular garden and park plant, as well as being used in temples and cemeteries. It grows as a spreading tree to 7-8 m (23-26 ft) high and wide, and is flushed with fragrant flowers of shades of pink, white and yellow over the summer and autumn.

Plumeria rubra was one of the many species first described by Carl Linnaeus, and appeared in the 1753 edition of Species Plantarum. Its specific epithet is derived from the Latin ruber "red". The epithets acuminata, acutifolia, and lutea are seen, but these are invalid. Its common names include frangipani, red paucipan, red-jasmine, red frangipani, common frangipani, temple tree, or simply plumeria.

Despite its common name, the species is not a "true jasmine" and not of the genus Jasminum.

The common name "frangipani" comes from an Italian noble family, a sixteenth-century marquess of which invented a plumeria-scented perfume. The genus name honors Charles Plumier, who was a French monk of the Franciscan order, and a botanist.

In Mexico the common name is cacaloxóchitl or cacaloxúchitl. The name comes from Nahuatl and means "crow's flower". P. rubra was declared the national flower of Nicaragua in 1971, where it is known as sacuanjoche. In Spanish, frangipanis are also referred to as alhelí, alhelí cimarrón, and suche. The term melia is a Hawaiian one. In the Cook Islands, it is known as tipani. It is grown extensively in southern and western parts of India, where it is named champa or a derivative thereof such as chaaphaa, champige etc. It is also referred to as champa in Pakistan. In Cambodia it is given the names châmpéi krahâ:m (also romanised as krahom, meaning 'red'), or châmpéi slük sruëch, while the French term for the species is frangipanier à fleurs rouges. In Sri Lanka, it is known as araliya in Sinhalese. It is known by many names in Brazil, including jasmim-de-caiena, jasmin-do-pará, and jasmin-manga. Another name it has in Portuguese is flor-de-Santo-Antônio. In Myanmar, it is referred to as mawk-sam-ka, mawk-sam-pailong, and sonpabataing. In China, it has the common name ji dan hua, and in the United States, it is referred to as nosegay. In the Philippines, it is known as the kalachuchi.

Plumeria rubra belongs to the dogbane family and grows as a spreading shrub or small tree to a height of 2-8 m (5-25 ft) and similar width. It has a thick succulent trunk and sausage-like blunt branches covered with a thin grey bark. The branches are somewhat brittle and when broken, ooze a white latex that can be irritating to the skin and mucous membranes. This latex found in the stem of the plants is in fact toxic, but not deadly unless present in large quantities. The large green leaves can reach 30 to 50 cm (12 to 20 in) long and are arranged alternately and clustered at the end of the branches. The boles of these plants can be up to 25 cm in the wild. It tends to be smaller in cultivation.

They are deciduous, falling in the cooler months of the year. The flowers are terminal, appearing at the ends of branches over the summer. Often profuse and very prominent, they are strongly fragrant, and have five petals. The flowers give off their fragrance in the morning and in the evening. This fragrance is similar to that of rose, citrus, and cinnamon. The colors range from the common pink to white with shades of yellow in the centre of the flower. Initially tubular before opening out, the flowers are 5-7.5 cm (2-3 in) in diameter, and only rarely go on to produce seed - 20-60 winged seeds are contained in a 17.5 cm (7 in) pod. The fruits are cylindrical pods that are rarely found in cultivation.