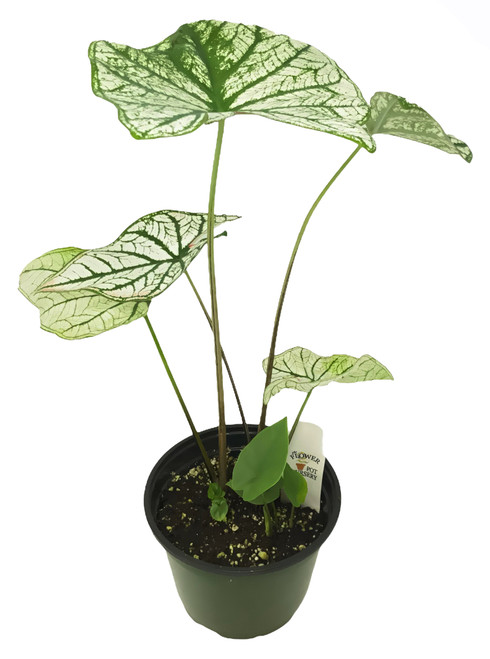 Caladium is a genus of flowering plants in the family Araceae. They are often known by the common name elephant ear (which they share with the closely related genera Alocasia, Colocasia, and Xanthosoma), heart of Jesus, and angel wings. There are over 1000 named cultivars of Caladium bicolor from the original South American plant.

The genus Caladium includes seven species that are native to South America and Central America, and naturalized in India, parts of Africa, and various tropical islands.] They grow in open areas of the forest and on the banks of rivers and go dormant during the dry season. The wild plants grow to 15-35 inches tall, with leaves mostly 6-18 inches long and broad.

From Malay Keladi, which refers to a few genera within the Araceae family (Alocasia, Caladium and Dieffenbachia). However, it may just specifically refer to the Colocasia genus.

Several species are grown as ornamental plants for their large, arrowhead-shaped leaves marked in varying patterns in white, pink, and red (somewhat resembling the unrelated coleus) and have been in cultivation in Europe since the late 18th century. The two forms most widely cultivated are called "fancy-leaved" and "lance-leaved". The former is the more commonly seen and is the traditional caladium of cultivation; the leaves are more heart-shaped. The latter has more lance-head-shaped leaves. Most Caladiums in cultivation grow to about 24 inches high and 24 inches wide, although dwarf varieties are now in cultivation.


Caladiums grow from tubers and can be propagated by dividing the tubers. They are hardy only to USDA plant hardiness zone 10; in colder areas, they are typically grown as tender "bulb"s or as houseplants.

During their growing season, they require moderate watering (damp, not soggy). Most varieties prefer partial to full shade, although sun-resistant varieties are now in cultivation. Approximately 98% of all caladium "bulbs" are from Lake Placid, Florida, in the United States. In recent years, many new varieties have become available through breeding and are now largely disease resistant. The bulk of "bulb" production is sold to pot producers, who in turn provide local nursery outlets with potted caladiums ready for immediate planting. Most "bulb" growers also sell direct retail via websites, shipping of "bulbs" takes place in the spring when temperatures permit ("bulbs" are subject to damage if temperatures are too low).

An annual festival is held during the last weekend of July in Lake Placid, Florida, home to a majority of the world's caladium fields. A popular activity is a tour of the fields of caladiums, the product of local growers. Every July since 2003, Gaylord Palms Resort & Convention Center in Kissimmee, Florida, has presented the Florida Caladium Showcase, the largest indoor and outdoor display of the plants, including new varieties. Many universities feature caladiums at field trials, you may also find displays at arboretums and many public gardens.