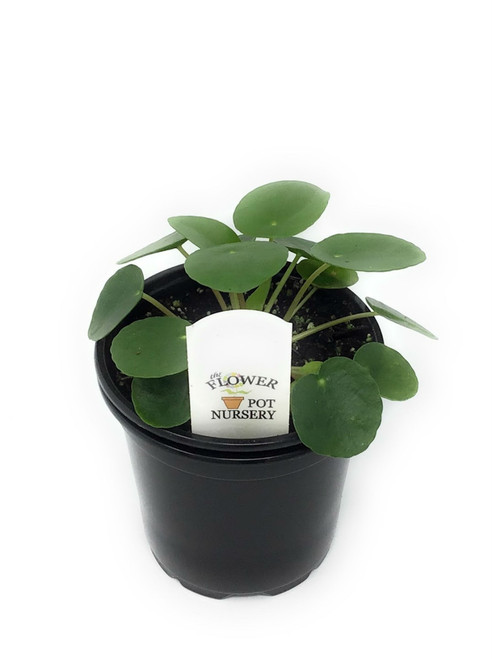 George Forrest was the first westerner to collect Pilea peperomioides, in 1906 and again in 1910, in the Cang Mountain range in Yunnan Province.

In 1945, the species was found by Norwegian missionary Agnar Espegren in Yunnan Province when he was fleeing from Hunan Province. Espegren took cuttings with him back to Norway, by way of India, in 1946 and from there it was spread throughout Scandinavia.

Pilea peperomioides is an example of a plant which has been spread amongst amateur gardeners via cuttings, without being well-known to western botanists. They did not know its true classification until the 1980s. The first known published image appeared in the Kew magazine in 1984.

Having a superficial resemblance to pennyworts and growing 30 cm (12 in) tall and wide, it is an erect, succulent, evergreen perennial, with round, dark green, peltate leaves up to 10 cm (4 in) in diameter on a long petiole. The stem axis is greenish to dark brown, usually simple, often upright straight, slightly lignified at the base. In poor growing conditions, the plants lose their leaves in the lower part of the branch axis and thereby assume a very distinctive habit. The plants are completely hairless. Striking are their large, circular (taler-shaped), shiny, change-constant leaves, which can have a diameter of over 15 centimeters. The petioles are wild growing 2 to 17 inches long, in indoor plants up to 30 centimeters. The flowers are inconspicuous.