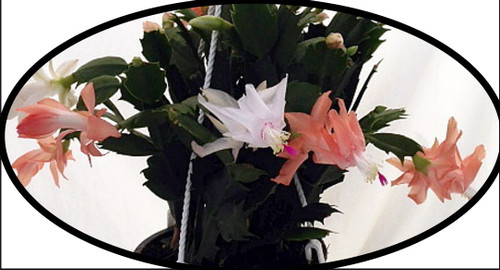 Schlumbergera is a small genus of cacti with six to nine species found in the coastal mountains of south-eastern Brazil. Plants grow on trees or rocks in habitats that are generally shady with high humidity, and can be quite different in appearance from their desert-dwelling cousins. Most species of Schlumbergera have stems which resemble leaf-like pads joined one to the other and flowers which appear from areoles at the joints and tips of the stems. Two species have cylindrical stems more similar to other cacti. Recent phylogenetic studies using DNA have led to three species of the related genus Hatiora being transferred into Schlumbergera, though this change is not universally accepted.

Common names for these cacti generally refer to their flowering season. In the Northern Hemisphere, they are called Christmas cactus, Thanksgiving cactus, crab cactus and holiday cactus. In Brazil, the genus is referred to as Flor de Maio (May flower), reflecting the period in which they flower in the Southern Hemisphere. Most of the popular houseplants are cultivars of Schlumbergera, rather than species, with flowers in white, pink, yellow, orange, red or purple. The Easter cactus or Whitsun cactus, until recently placed in the genus Hatiora, is also called a holiday cactus and has flowers in red, orange, pink and white.

The Truncata Group contains all cultivars with features derived mainly from the species S. truncata: stem segments with pointed teeth; flowers held more or less horizontally, usually above the horizontal, whose upper side is differently shaped from the lower side (zygomorphic); and pollen which is yellow. They generally flower earlier than members of the Buckleyi Group and, although common names are not applied consistently, may be distinguished as Thanksgiving cactus, crab cactus or claw cactus.

The Buckleyi Group contains all cultivars with at least some features clearly showing inheritance from S. russelliana: stem segments with rounded, more symmetrical teeth; more or less symmetrical (regular) flowers which hang down, below the horizontal; and pollen which is pink. They generally flower later than members of the Truncata Group and are more likely to be called Christmas cactus.

Flower cut in half vertically with the base to the left; the bases of the tepals form a kind of tube, the upper parts bending away from the tube; the stamens run the full length of the flower from left to right and emerge from the end; some start at the very base of the flower, others start from further along to the right, being joined to a tepal.
Zygomorphic flower, probably of a cultivar in the S. Truncata Group, cut in half to show its internal structure
In the wild, the species of Schlumbergera grow either on trees (epiphytic) or on rocks (epilithic) and can form sizeable shrubs with woody bases; a height of up to 4 ft has been reported for one species (S. opuntioides). They are leafless, the green stems acting as photosynthetic organs. The stems are composed of segments, which take one of two forms. In most species the segments are strongly flattened (cladodes), being made up of a central core with two (or more rarely three) "wings". Special structures characteristic of cacti, called "areoles", then occur at the ends of the segments of the stem. In two species the stems are less flattened, more cylinder-shaped, and the areoles are arranged in a more or less spiral pattern all over the segments. In both cases, the areoles, which may have wool and bristles, are where the flower buds appear.

The flowers either hang downwards and are almost regular (radially symmetrical or actinomorphic) or, as in most species, are held more or less horizontally with the higher side of the flower different from the lower side (radially asymmetrical or zygomorphic). In those species whose flowers are held up, their angle with the horizontal is relatively constant and is characteristic of the species. Each flower has 20-30 tepals. The outer tepals - those closer to the base of the flower - are short and unconnected, and spread out or curve backwards. The inner tepals - those towards the tip of the flower - are longer and in most species become progressively more fused together at the base to form a floral tube. In some species the difference between the outer and inner tepals creates the appearance of a "flower within a flower". The flowers produce nectar in a chamber at the base of the floral tube.

In most species, the many stamens are arranged in two series, with the inner stamens being fused at the base to form a short tubular structure and the outer stamens arising from along the floral tube. The style is usually dark red and has a stigma with 6-8 lobes; the style plus stigma is roughly the same length as the stamens. If the flower is fertilized, a fleshy fruit forms, either smooth or with ribs. The brown or black seeds are about 1 mm in diameter.