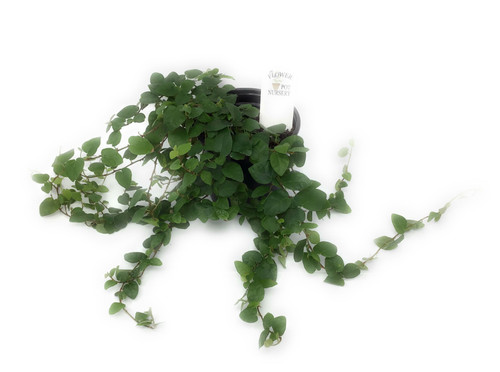 Ficus pumila, commonly known as the creeping fig or climbing fig, is a species of flowering plant in the mulberry family, native to East Asia (China, Japan, Vietnam) and naturalized in parts of the southeastern and south-central United States. It is also found in cultivation as a houseplant. The etymology of the species name corresponds to the Latin word pumilus meaning dwarf, and refers to the very small leaves of the plant. Ficus pumila is a woody evergreen liana, growing to 8 ft 2 in–13 ft 1 in. The juvenile foliage is much smaller and thinner than mature leaves produced as the plant ages. The leaves are oval, cordate, asymmetrical, with opposite veins. It is creeping or can behave like a liana and also climb trees, rocks, etc. up to 4 m in height or more. The aerial roots secrete a translucent latex that hardens on drying, allowing the sticks to adhere to their support. Give credit where credit is due: Wikipedia 2020