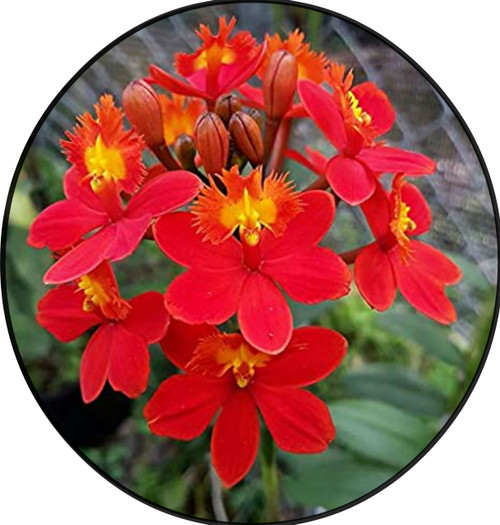 Epidendrum, abbreviated Epi in the horticultural trade, is a large neotropical genus of the orchid family. With more than 1,500 species, some authors describe it as a mega-genus. The genus name refers to its epiphytic growth habit. When Carl Linnaeus named this genus in 1763, he included in this genus all the epiphytic orchids known to him. Although few of these orchids are still included in the genus Epidendrum, some species of Epidendrum are nevertheless not epiphytic. They are native to the tropics and subtropical regions of the American continents, from North Carolina to Argentina. Their habitat can be epiphytic, terrestrial (such as E. fulgens), or even lithophytic (growing on bare rock, such as E. calanthm and E. saxatile). Many are grown in the Andes, at altitudes between 1,000 and 3,000 m. Their habitats include humid jungles, dry tropical forests, sunny grassy slopes, cool cloud forests, and sandy barrier islands. Members of this genus can be very aggressive colonisers of disturbed habitat, and many species which were once rare in this genus have become more common as the result of human activities. For example, some of these plants can be found in greater abundance growing terrestrially along road cuts throughout their native ranges as the result of road construction. Many of these species are relatively easy to grow in rich humus compost with some sand. The plants resemble Dendrobiums in form and habit typically, although they tend to be terrestrial rather than lithophytic and epiphytic, and do better in a humus rich, well aerated substrate. Most of the high altitude members of this genus from cloud forests defy cultivation outside their habitat, and it is reported that even moving a plant from one location to another on the same host tree in habitat will result in the death of the plant, possibly due to dependency on a specific mycorrhizal fungal symbiont. Give credit where credit is due: Wikipedia 2020
×