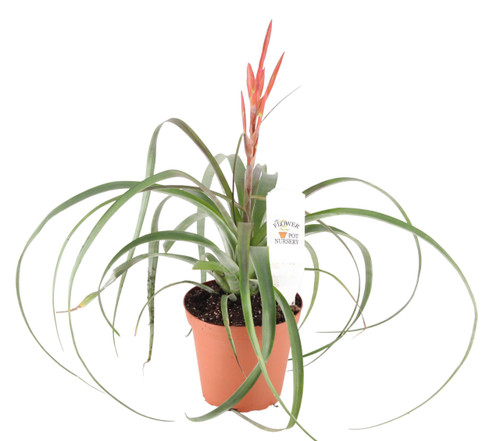 Tillandsia is a genus of around 650 species of evergreen, perennial flowering plants in the family Bromeliaceae, native to the forests, mountains and deserts of northern Mexico and south-eastern United States, Mesoamerica and the Caribbean to mid Argentina. Their leaves, more or less silvery in color, are covered with specialized cells (trichomes) capable of rapidly absorbing water that gathers on them.

Sometimes they are also commonly known as airplants because of their natural propensity to cling wherever conditions permit: telephone wires, tree branches, barks, bare rocks, etc. Their light seeds and a silky parachute facilitate this spread. Most Tillandsia species are epiphytes - which translates to 'upon a plant'. Some are aerophytes, which have a minimal root system and grow on shifting desert soil. Due to their epiphytic way of life, these plants will not grow in soil but live on the branches of trees, in deserts and on other substrates that will not be saturated with water for very long.

They are perennial herbaceous plants which exhibit a multitude of physiological and morphological differences making this a diverse genus. Having native habitats that vary from being epiphytic and saxicolous, species have certain adaptations, such as root systems designed to anchor to other plants or substrates, and modified trichomes for water and nutrient intake. Some of the species, like the majority of bromeliaceae, grow as funnel bromeliads, with a compressed stem axis. The leaves are then close together in rosettes, and cover the lower areas of the leaves, forming a funnel for collecting water.

These leaf rosettes, a common physical characteristic in Tillandsia species, collect nutrients and water. The flowers typically involve bright, vibrant colors, with blooms or inflorescences produced on a stalk or several stalks. The flower's color varies greatly; red, yellow, purple and pink flowers exist in this genus, and multicolored flowers are known. The bright colors attract pollinators. An air plant's foliage may also change color when it blooms, also attracting pollinators. The hermaphrodite flowers are threefold with double perianth. The three free sepals are symmetrical and pointed. The seeds have a "parachute" similar to the dandelion.

Give credit where credit is due: Wikipedia 2023