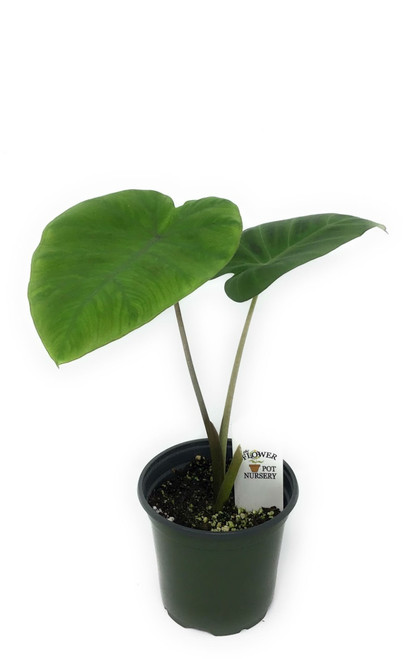 Colocasia gigantea, also called giant elephant ear or Indian taro, is a 1.5–3 m tall herb with a large, fibrous, inedible corm, producing at its apex a whorl of large leaves. Colocasia gigantea is close to Alocasia macrorrhizos and is thought to be produced from natural crossing between A. macrorrhizos and C. esculenta. Colocasia is a genus of flowering plants in the family Araceae, native to southeastern Asia and the Indian subcontinent. Some species are widely cultivated and naturalized in other tropical and subtropical regions. Common names include tarul, karkala ko ganu, elephant-ear, taro, cocoyam, dasheen, aloochi paane, saru, hembu, chamadhumpa/chamagadda in Telugu, shavige gadde, and eddoe. Elephant-ear and cocoyam are also used for some other large-leaved genera in the Araceae, notably Xanthosoma and Caladium. The generic name is derived from the ancient Greek word kolokasion, which in the Greek botanist Dioscorides (1st century AD) meant the edible roots of both Colocasia esculenta and Nelumbo nucifera. They are herbaceous perennial plants with a large corm on or just below the ground surface. The leaves are large to very large, 7.9–59.1 in long, with a sagittate shape. The elephant's-ear plant gets its name from the leaves, which are shaped like a large ear or shield. Give credit where credit is due: Wikipedia 2020
×