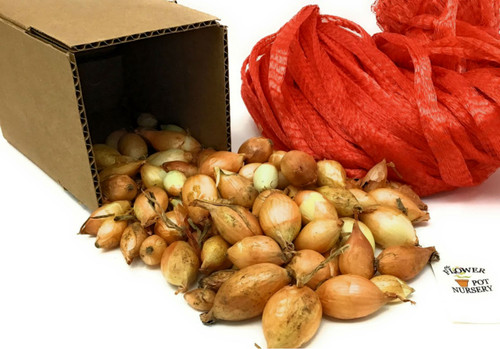 A sweet onion is a variety of onion that is not pungent. Their mildness is attributable to their low sulfur content and high water content when compared to other onion varieties.

Vidalia onions were first grown near Vidalia, Georgia, in the early 1930s. Today the name refers to onions grown in a 20-county production region in the state of Georgia as defined by both Georgia state statute and by the U.S. Code of Federal Regulations.

South Texas also acquired what is known as the 1015 onion in the early 1980s by Dr. Leonard M. Pike, a horticulture professor at Texas A&M University, Texas. 1015 Onions are named for their optimum planting date, October 15. Grown only in the Rio Grande Valley of South Texas, this large, prized onion was developed after ten years of extensive research and testing and a million dollars in cost. As a result, Texas achieved a mild, very sweet onion with the nickname - the "Million Dollar Baby". Onions are Texas' leading vegetable crop. The state produces mostly sweet yellow varieties. The sweet onion was adopted as Texas' official state onion in 1997.

The Walla Walla sweet onion is named for Walla Walla County, Washington, where it is grown. Its development began around 1900 when Peter Pieri, a French soldier who settled in the area, brought a sweet onion seed from the island of Corsica with him to the Walla Walla Valley. This sweet onion was developed by selecting and reseeding onions from each year's crop that possessed sweetness, jumbo size, and round shape. It is the designated vegetable of Washington State. Gov. Christine Gregoire signed the "onion bill" in 2007 to make it the state's official vegetable.