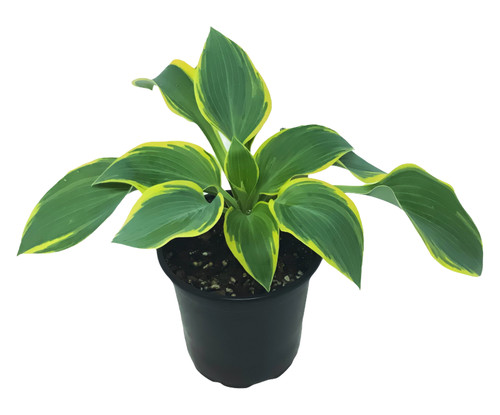 Hosta is a genus of plants commonly known as hostas, plantain lilies and occasionally by the Japanese name giboshi. Hostas are widely cultivated as shade-tolerant foliage plants. The genus is currently placed in the family Asparagaceae, subfamily Agavoideae, and is native to northeast Asia. Like many "lilioid monocots", the genus was once classified in the Liliaceae. The genus was named by Austrian botanist Leopold Trattinnick in 1812, in honor of the Austrian botanist Nicholas Thomas Host. In 1817, the generic name Funkia was used by German botanist Kurt Sprengel in honor of Heinrich Funk, a collector of ferns and alpines; this was later used as a common name and can be found in some older literature.

Hostas are herbaceous perennial plants, growing from rhizomes or stolons, with broad lanceolate or ovate leaves varying widely in size by species from 1-18 in long and 0.75-12 in broad. The smallest varieties are called miniatures. Variation among the numerous cultivars is even greater, with clumps ranging from less than four in across and three in high to more than six ft across and four ft high. Leaf color in wild species is typically green, although some species (e.g., H. sieboldiana) are known for a glaucous waxy leaf coating that gives a blue appearance to the leaf. Some species have a glaucous white coating covering the underside of the leaves. Natural mutations of native species are known with yellow-green ("gold") colored leaves or with leaf variegation (either white/cream or yellowish edges or centers). Variegated plants very often give rise to sports that are the result of the reshuffling of cell layers during bud formation, producing foliage with mixed pigment sections.