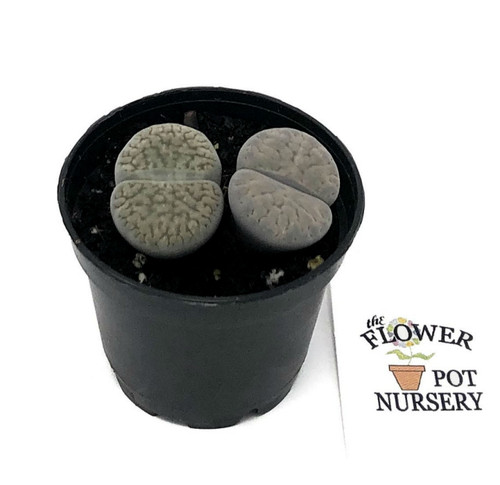 Lithops is a genus of succulent plants in the ice plant family, Aizoaceae. Members of the genus are native to southern Africa. The name is derived from the Ancient Greek words λίθος (lithos), meaning "stone," and ὄψ (ops), meaning "face," referring to the stone-like appearance of the plants. They avoid being eaten by blending in with surrounding rocks and are often known as pebble plants or living stones. The formation of the name from the Greek "-ops" means that even a single plant is called a Lithops.
Individual Lithops plants consist of one or more pairs of bulbous, almost fused leaves opposite to each other and hardly any stem. The slit between the leaves contains the meristem and produces flowers and new leaves. The leaves of Lithops are mostly buried below the surface of the soil, with a partially or completely translucent top surface known as a leaf window which allows light to enter the interior of the leaves for photosynthesis.

During winter a new leaf pair, or occasionally more than one, grows inside the existing fused leaf pair. In spring the old leaf pair parts to reveal the new leaves and the old leaves will then dry up. Lithops leaves may shrink and disappear below ground level during drought. Lithops in habitat almost never have more than one leaf pair per head, presumably as an adaptation to the arid environment. Yellow or white flowers emerge from the fissure between the leaves after the new leaf pair has fully matured, one per leaf pair. This is usually in autumn, but can be before the summer solstice in L. pseudotruncatella and after the winter solstice in L. optica. The flowers are often sweetly scented.

The most startling adaptation of Lithops is the colouring of the leaves. The leaves are fenestrated, and the epidermal windows are patterned in various shades of cream, grey, and brown, with darker windowed areas, dots, and red lines, according to species and local conditions. The markings function as remarkable camouflage for the plant in its typical stone-like environment. As is typical of a window plant, the green tissue lines the inside of the leaves and is covered with translucent tissue beneath the epidermal windows.

Lithops are obligate outcrossers and require pollination from a separate plant. Like most mesembs, Lithops fruit is a dry capsule that opens when it becomes wet; some seeds may be ejected by falling raindrops, and the capsule re-closes when it dries out. Capsules may also sometimes detach and be distributed intact, or may disintegrate after several years.