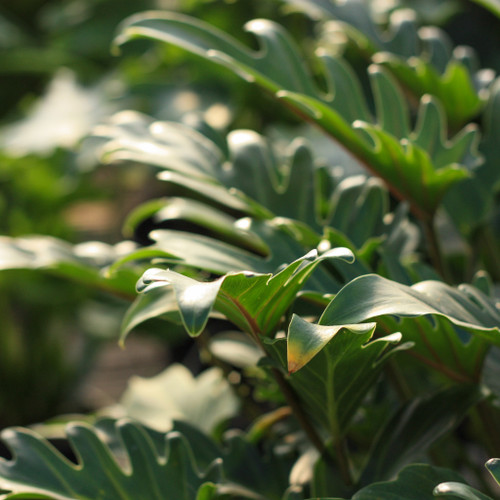 Philodendron is a large genus of flowering plants in the family Araceae. As of September 2015, the World Checklist of Selected Plant Families accepted 489 species; other sources accept different numbers. Regardless of number of species, the genus is the second-largest member of the family Araceae, after genus Anthurium. Taxonomically, the genus Philodendron is still poorly known, with many undescribed species. Many are grown as ornamental and indoor plants. The name derives from the Greek words philo- or "love, affection" and dendron or "tree". The generic name, Philodendron, is often used as the English name, "philodendron".

Compared to other genera of the family Araceae, philodendrons have an extremely diverse array of growth methods. The habits of growth can be epiphytic, hemiepiphytic, or rarely terrestrial. Others can show a combination of these growth habits depending on the environment. Hemiepiphytic philodendrons can be classified into two types: primary and secondary hemiepiphytes. A primary hemiepiphytic philodendron starts life high up in the canopy where the seed initially sprouts. The plant then grows as an epiphyte. Once it has reached a sufficient size and age, it will begin producing aerial roots that grow toward the forest floor. Once they reach the forest floor, nutrients can be obtained directly from the soil. In this manner, the plant's strategy is to obtain light early in its life at the expense of nutrients. Some primary epiphytic species have a symbiotic relationship with ants. In these species, the ants' nest is grown amongst the plant's roots, which help keep the nest together. Philodendrons have extrafloral nectaries, glands that secrete nectar to attract the ants. The philodendron, in turn, obtains nutrients from the surrounding ant nest, and the aggressive nature of the ants serves to protect the plant from other insects which would eat it.

Secondary hemiepiphytes start life on the ground or on part of a tree trunk very close to the ground, where the seeds sprout. These philodendrons have their roots in the ground early in their lives. They then begin climbing up a tree and eventually may become completely epiphytic, doing away with their subterranean roots. Secondary hemiepiphytes do not always start their lives close to a tree. For these philodendrons, the plant will grow with long internodes along the ground until a tree is found. They find a suitable tree by growing towards darker areas, such as the dark shadow of a tree. This trait is called scototropism. After a tree has been found, the scototropic behavior stops and the philodendron switches to a phototropic growth habit and the internodes shorten and thicken. Usually, however, philodendrons germinate on trees.


Give credit where credit is due: Wikipedia 2021