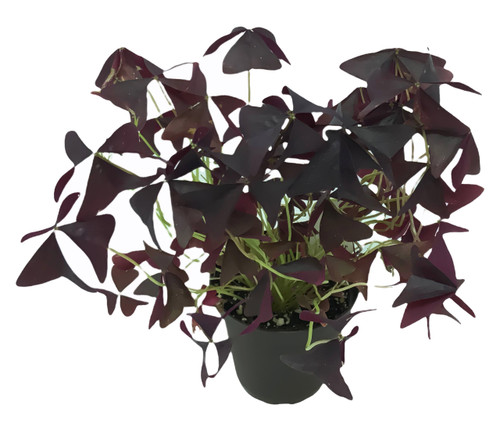 Oxalis triangularis, commonly called false shamrock, is a species of perennial plant in the family Oxalidaceae. It is native to several countries in southern South America. This woodsorrel is typically grown as a houseplant but can be grown outside in USDA climate zones 8a-11, preferably in light shade.

The deep maroon leaves are trifoliate, like species in the clover genus Trifolium which are commonly called shamrock, hence the name "false shamrock". An interesting feature is that the leaves close like an umbrella at night (See the timelapse video below) or when disturbed or if kept under harsh sunlight. The white or pale pink five-petalled flowers also close at night.

Growing to 20 in tall and broad, the subspecies O. triangularis subsp. papilionacea, the purpleleaf false shamrock, is hardy in mild and coastal areas of Britain, down to 23 °F, and has won the Royal Horticultural Society's Award of Garden Merit. It is a perennial plant without aerial stem, formed by leaves borne by a long petiole emerging at the ground level of a tuberous rhizome. The leaf is formed of three sessile leaflets, obtriangular to obovate-triangular, glabrous, arranged in the same plane perpendicular to the petiole.

The five densely haired sepals are narrow and slightly reddish at the top. The five white petals are about 2 inches long and oblong-lanceolate. The stamens and the style are densely hairy. The limb of the wild species is green but purple cultivars have been selected for horticulture. Flowering takes place from spring to autumn.