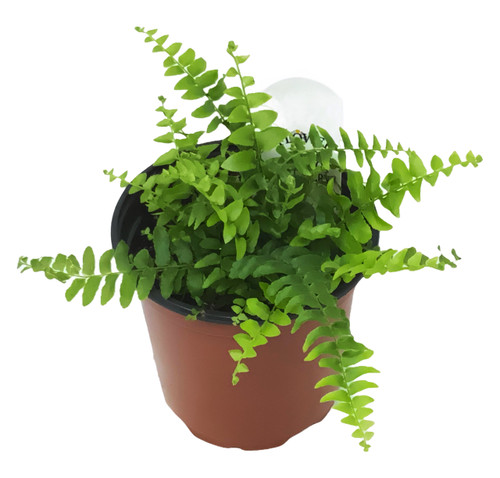 Nephrolepis exaltata, known as the sword fern or Boston fern, is a species of fern in the family Lomariopsidaceae (sometimes treated in the families Davalliaceae or Oleandraceae, or in its own family, Nephrolepidaceae) native to tropical regions throughout the world. This evergreen plant can reach as high as 16-35 in, and in extreme cases up to 4 ft 11 in. It is also known as the Boston swordfern, wild Boston fern, Boston Blue Bell Fern, tuber ladder fern, or fishbone fern.

The fronds of Nephrolepis exaltata are 20-98 in long and 2.4-5.9 in broad, with alternate pinnae (the small "leaflets" on either side of the midrib), each pinna being 0.79-3.15 in long. The pinnae are generally deltoid, as seen in the adjacent picture. The pinnate vein pattern is also visible on these highly compound leaves. The edges appear slightly serrate. The plant can grow both terrestrially and as an epiphyte, linear to lanceolate and glandular. The rachis bears monochrome sprout soups. The leaflets are entire, undestroyed and oblong-lanceolate up to 4.8 inches long and up to 0.9 inches wide. They stand at a distance of less than 0.39 in. The sori are rounded. The spores are warty and wrinkled. Nephrolepis exaltata forms an underground rhizome that is slim and tuberous.

The species has erect fronds, but Nephrolepis exaltata 'Bostoniensis' (Boston fern) and 'Teddy Junior' have gracefully arching fronds. This mutation was discovered in a shipment of N. exaltata to Boston from Philadelphia in 1894. Other proposals for the origin of the term Boston fern were documented by David Fairchild, who stated that the term came from Florida pioneer nurseryman John Soar, who sent the plants to his friend in Boston.