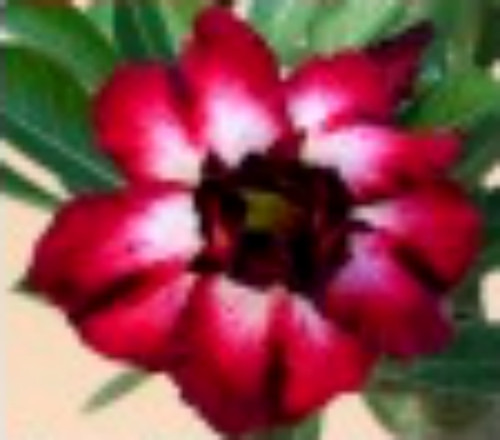 Adenium obesum is a species of flowering plant in the dogbane family, Apocynaceae, that is native to the Sahel regions, south of the Sahara (from Mauritania and Senegal to Sudan), and tropical and subtropical eastern and southern Africa and Arabia. Common names include Sabi star, kudu, mock azalea, impala lily and desert rose. It is an evergreen or drought-deciduous succulent shrub (which can also lose its leaves during cold spells, or according to the subspecies or cultivar). It can grow to 3.3–9.8 ft in height, with pachycaul stems and a stout, swollen basal caudex. The leaves are spirally arranged, clustered toward the tips of the shoots, simple entire, leathery in texture, 2.0–5.9 in long and 0.39–3.15 in broad. The flowers are tubular, 0.79–1.97 in long, with the outer portion 1.6–2.4 in diameter with five petals, resembling those of other related genera such as Plumeria and Nerium. The flowers tend to red and pink, often with a whitish blush outward of the throat. Give credit where credit is due: Wikipedia 2020
×