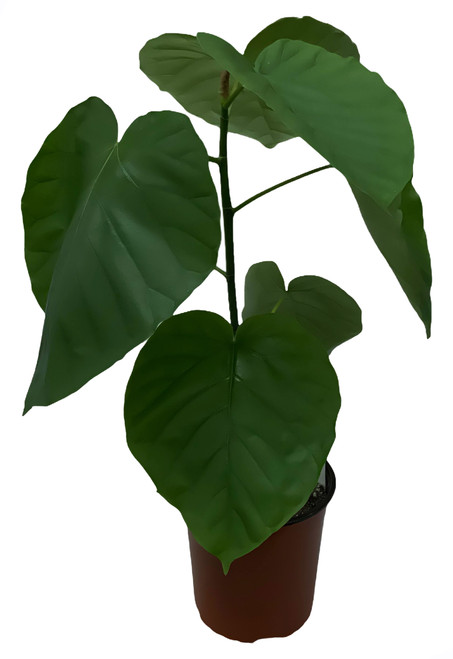 Ficus is a genus of about 850 species of woody trees, shrubs, vines, epiphytes and hemiepiphytes in the family Moraceae. Collectively known as fig trees or figs, they are native throughout the tropics with a few species extending into the semi-warm temperate zone. The common fig (F. carica) is a temperate species native to southwest Asia and the Mediterranean region (from Afghanistan to Portugal), which has been widely cultivated from ancient times for its fruit, also referred to as figs. The fruit of most other species are also edible though they are usually of only local economic importance or eaten as bushfood. However, they are extremely important food resources for wildlife. Figs are also of considerable cultural importance throughout the tropics, both as objects of worship and for their many practical uses.

The stipule of Ficus religiosa. The white "stipule" contains a new leaf and a new "stipule".
Ficus is a pantropical genus of trees, shrubs, and vines occupying a wide variety of ecological niches; most are evergreen, but some deciduous species are endemic to areas outside of the tropics and to higher elevations. Fig species are characterized by their unique inflorescence and distinctive pollination syndrome, which uses wasp species belonging to the family Agaonidae for pollination.

Specific identification of many of the species can be difficult, but members of the genus Ficus are relatively easy to recognize. Many have aerial roots and a distinctive shape or habit, and their fruits distinguish them from other plants. The fruit of Ficus is an inflorescence enclosed in an urn-like structure called a syconium, which is lined on the inside with the fig's tiny flowers that develop into multiple ovaries on the inside surface. In essence, the fig fruit is a fleshy stem with multiple tiny flowers that fruit and coalesce.

The unique fig pollination system, involving tiny, highly specific wasps, known as fig wasps that enter via ostiole these subclosed inflorescences to both pollinate and lay their own eggs, has been a constant source of inspiration and wonder to biologists.[6] Notably, three vegetative traits together are unique to figs. All figs present a white to yellowish latex, some in copious quantities; the twig shows paired stipules -or circular scars if the stipules have fallen off; the lateral veins at the base of the leaf are steep, forming a tighter angle with the midrib than the other lateral veins, a feature referred to as "triveined".

No unambiguous older fossils of Ficus are known. However, current molecular clock estimates indicate that Ficus is a relatively ancient genus being at least 60 million years old,[6] and possibly as old as 80 million years. The main radiation of extant species, however, may have taken place more recently, between 20 and 40 million years ago.

Some better-known species that represent the diversity of the genus include the common fig, a small, temperate deciduous tree whose fingered fig leaf is well known in art and iconography; the weeping fig (F. benjamina), a hemiepiphyte with thin, tough leaves on pendulous stalks adapted to its rainforest habitat; the rough-leaved sandpaper figs from Australia; and the creeping fig (F. pumila), a vine whose small, hard leaves form a dense carpet of foliage over rocks or garden walls.

Moreover, figs with different plant habits have undergone adaptive radiation in different biogeographic regions, leading to very high levels of alpha diversity. In the tropics, Ficus commonly is the most species-rich plant genus in a particular forest. In Asia, as many as 70 or more species can coexist. Ficus species richness declines with an increase in latitude in both hemispheres.