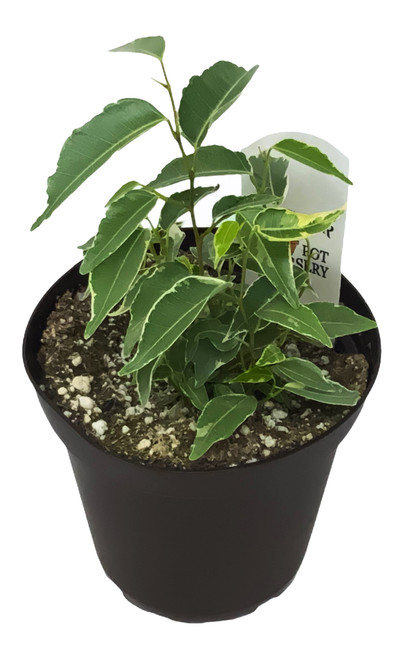 Ficus benjamina, commonly known as weeping fig, benjamin fig or ficus tree, and often sold in stores as just ficus, is a species of flowering plant in the family Moraceae, native to Asia and Australia. It is the official tree of Bangkok. A recently described variety, Ficus benjamina var. Bracteata is found in uplifted coral forests of southern Taiwan. The species is also naturalized in the West Indies and in the states of Florida and Arizona in the United States. In its native range, its small fruit are favored by some birds, such as the superb fruit dove, wompoo fruit dove, pink-spotted fruit dove, ornate fruit dove, orange-bellied fruit dove, Torresian imperial pigeon, and purple-tailed imperial pigeon.

Ficus benjamina is a tree reaching 98 feet tall in natural conditions, with gracefully drooping branchlets and glossy leaves, oval with an acuminate tip. The bark is light gray and smooth. The bark of young branches is brownish. It is a relatively small-leaved fig. The changeable leaves are simple, entire and stalked. The young foliage is light green and slightly wavy, the older leaves are green and smooth; the leaf blade is ovate to ovate-lanceolate with wedge-shaped to broadly rounded base and ends with a short dropper tip. The pale glossy to dull leaf blade is 5 to 2 to 4+1⁄2 inches long and 1 to 2+1⁄2 inches wide. Near the leaf margins are yellow crystal cells ("cystolites"). The two membranous, deciduous stipules are not fused, lanceolate and 1⁄4 to 1⁄2 inch long.

The ripe figs (collective fruit) are orange-red and have a diameter of 3⁄4 to 1 inch.