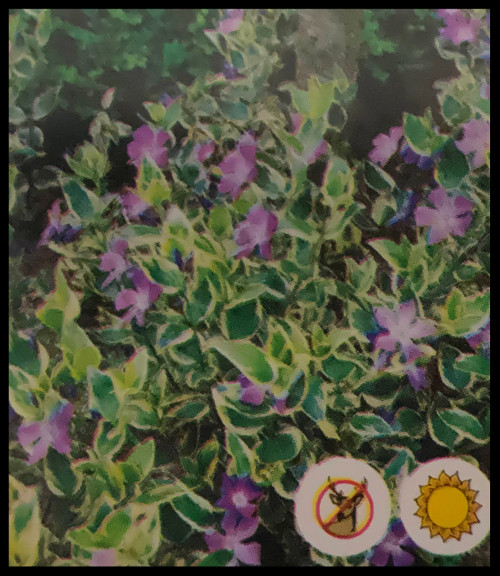 Vinca major, with the common names bigleaf periwinkle, large periwinkle, greater periwinkle and blue periwinkle, is a species of flowering plant in the family Apocynaceae, native to the western Mediterranean. Growing to 10 in tall and spreading indefinitely, it is an evergreen perennial, frequently used in cultivation as groundcover.

The genus name probably derives from the Latin word vincire, meaning bind, as the long creeping vines were used to prepare garlands. The species name major refers to the larger size in respect of the similar Vinca minor L.

Vinca major is a trailing vine, spreading along the ground and rooting along the stems to form dense masses of groundcover.

The leaves are opposite, nearly orbicular at the base of the stems and lanceolate at the apex, glossy dark green with a leathery texture and an entire but distinctly ciliate margin, and a hairy petiole.

The flowers are hermaphrodite, axillary and solitary, violet-purple, with a five-lobed corolla. The calyx surrounding the base of the flower is 0.39-0.67 in long with hairy margins. The flowering period extends from early spring to autumn.