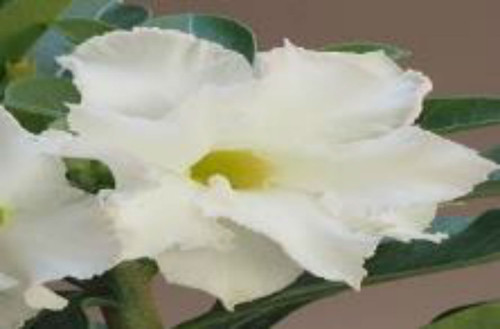 "Adenium obesum" Also known by the names "Sabi Star, Kudu, Mock Azalea, Impala Lily & Desert-rose.
It is an evergreen or drought-deciduous succulent shrub (which can also lose its leaves during cold spells, or according to the subspecies or cultivar). It can grow to 3.3-9.8 ft in height, with pachycaul stems and a stout, swollen basal caudex. The leaves are spirally arranged, clustered toward the tips of the shoots, simple entire, leathery in texture, 2.0-5.9 in long and 0.39-3.15 in broad. The flowers are tubular, 0.79-1.97 in long, with the outer portion 1.6-2.4 in diameter with five petals, resembling those of other related genera such as Plumeria and Nerium. The flowers tend to be red and pink, often with a whitish blush outward of the throat.