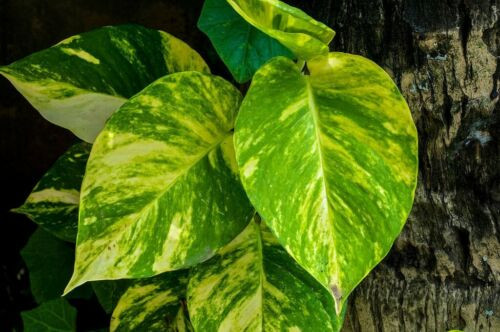 Epipremnum aureum is a species of flowering plant in the family of Araceae, native in Mo'orea, French Polynesia. The species is a popular houseplant in temperate regions, but has also become naturalised in tropical and sub-tropical forests worldwide, including northern Australia, Southeast Asia, India, Pakistan, Nepal, Bangladesh, Hawaii and the West Indies, where it has caused severe ecological damage in some cases.

The plant has a multitude of common names including golden pothos, hunter's robe, ivy arum, money plant, silver vine, Solomon Islands ivy and taro vine. It is also called devil's vine or devil's ivy because it is almost impossible to kill. It is sometimes mistakenly labeled as a Philodendron in plant stores. It is known as money plant in India and Bangladesh.

E. aureum is an evergreen vine growing to 20 m (66 ft) tall, with stems up to 4 cm (2 in) in diameter, climbing by means of aerial roots which adhere to surfaces. The leaves are alternate, heart-shaped, entire on juvenile plants, but irregularly pinnatifid on mature plants, up to 100 cm (39 in) long and 45 cm (18 in) broad; juvenile leaves are much smaller, typically under 20 cm (8 in) long. The flowers are produced in a spathe up to 23 cm (9 in) long. This plant produces trailing stems when it climbs up trees and these take root when they reach the ground and grow along it. The leaves on these trailing stems grow up to 10 cm (4 in) long and are the ones normally seen on this plant when it is cultivated as a pot plant.

In temperate regions it is a popular houseplant with numerous cultivars selected for leaves with white, yellow, or light green variegation. It is often used in decorative displays in shopping centers, offices, and other public locations largely because it requires little care and is also attractively leafy. It is also efficient at removing indoor pollutants such as formaldehyde, xylene, and benzene. A study found that this effect lessened the higher the molecular weight of the polluting substance. As a houseplant it can reach a height of 20 m (66 ft) or more, given suitable support. It has gained the Royal Horticultural Society's Award of Garden Merit.

The plant is sometimes used in aquariums, placed on top of the aquarium and allowed to grow roots in the water. This is beneficial to the plant and the aquarium as it absorbs many nitrates and uses them for growth.