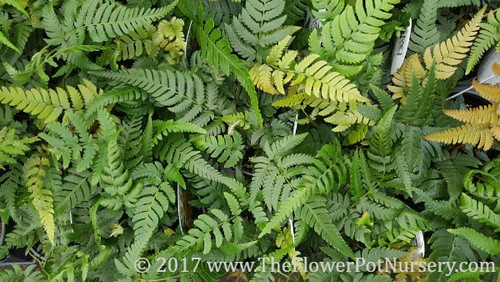 Dryopteris commonly called wood fern, male fern (referring in particular to Dryopteris filix-mas), or buckler fern, is a genus of about 250 species of ferns with distribution in the temperate Northern Hemisphere, with the highest species diversity in eastern Asia. Many of the species have stout, slowly creeping rootstocks that form a crown, with a vase-like ring of fronds. The sori are round, with a peltate indusium. The stipes have prominent scales.

Hybridisation is a well-known phenomenon within this group, with many species formed by this method.

Dryopteris species are used as food plants by the larvae of some Lepidoptera species including Batrachedra sophroniella (which feeds exclusively on D. cyatheoides) and Sthenopis auratus.

Dryopteris labordei, the Golden Mist wood fern, is an Australian discovery of what has also been classified as Dryopteris indusiata. Totally unusual orange/salmon new fronds distinguish this choice selection. Like many ferns with colorful new growth the foliage will eventually become a rich and vivid green at maturity. The lower pinnae have downward pointing pinnules giving the entire triangular frond a dagger like appearance. Evergreen with a broad habit “Golden Mist” is not particular about soils and will reach 18 to maybe 24 inches in light shade. It is new on the market but has been successfully tested in Zones 5-8.