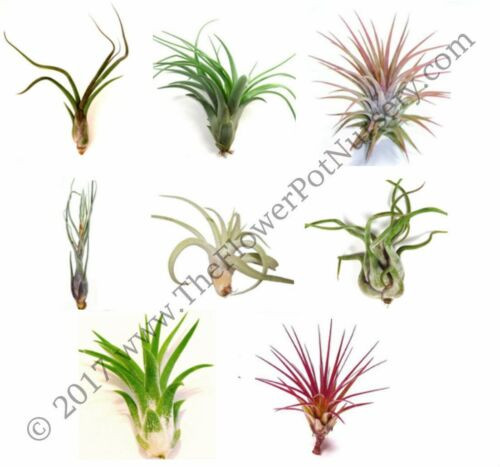 10 Large Premium assorted Airplants air plants - Tillandsia spp. - 7 DIFFERENT SPECIES - Free Shipping! This listing is for 10 large assorted Tillandsia species. The plants you receive are the ones in the photos above or ones similar in size and shape. Size varies from 4 - 9 inches making these large premium Tillandsia. This listing is for the following varieties: Baileyi Brachycaulos V. Abdita Ionantha Rubra Butzii Capittata Peach Caput Medusae Ionantha V. Scaposa Melanocrater Tricolor You will receive 10 assorted varieties including at least 7 of the 8 varieties listed above. That is SEVEN DIFFERENT SPECIES OF TILLANDSIA! Your order will also include a photo document with species/varieties for identification of your new Tillandsia species as well as a flowering identification document. Tillandsia Tillandsia is a genus of around 650 species of evergreen, perennial flowering plants in the family Bromeliaceae, native to the forests, mountains and deserts of Central and South America, the southern United States and the West Indies. They have naturally been established in diverse environments such as equatorial tropical rain forests, high elevation Andes mountains, rock dwelling (saxicolous) regions, and Louisiana swamps, such as the usneoides (Spanish Moss) species growing atop tree limbs. Airplant is a common name for plants in this genus. Most Tillandsia species are epiphytes – i.e. they normally grow without soil while attached to other plants. Some are aerophytes or air plants, which have no roots and grow on shifting desert soil. Generally, the thinner-leafed varieties grow in rainy areas and the thick-leafed varieties in areas more subject to drought. Most species absorb moisture and nutrients through the leaves from rain, dew, dust, decaying leaves and insect matter, aided by structures called trichomes. Description Tillandsia recurvata and another Bromeliaceae species on electric wires near San Juan de los Morros, Venezuela Fruit of Spanish moss Tillandsias are epiphytes and need no soil because water and nutrients are absorbed through the leaves. The roots are mainly used as anchors. Propagation is by seeds or by offsets called "pups". A single plant could yield up to a dozen pups. Offsets can be separated when about 2/3 the size of their mother to encourage a new colony. Although not normally cultivated for their flowers, some Tillandsia will bloom on a regular basis. However, while some may exhibit a spectacular inflorescence, most flowers are generally small. The flowers of some species may change color through the blooming cycle. Some species or varieties produce fragrant flowers. In addition, it is quite common for some species to take on a different leaf color (usually changing from green to reddish tones), called "blushing", when about to flower. This is an indication that the plant is monocarpic (flowers once before dying) but offsets around the flowering plant will continue to thrive. Blushing also signifies ripe time for pollination, a