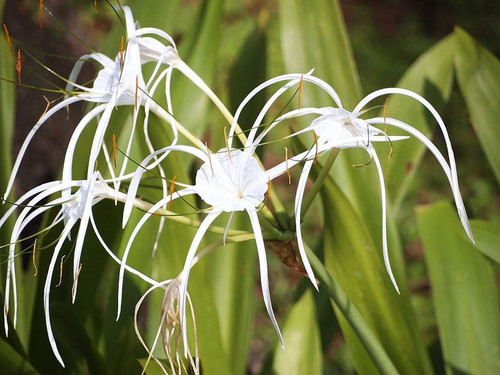 6 Mature Spider Lily - Hymenocallis caribaea - Plants / Bulbs -Beautiful Flowers Hymenocallis caribaeais a plant in the Amaryllidaceae with the common names "Caribbean spider-lily" or "variegated spider-lily." It is native to the islands of the Caribbean and to northern South America. It is regarded as native to from Puerto Rico, Jamaica, Hispaniola, Cuba, the Virgin Islands, and the Windward and Leeward Islands, and the Venezuelan Antilles. It is also commonly cultivated as an ornamental in many other tropical and subtropical regions and reportedly naturalized in Sri Lanka, New South Wales, Bermuda, French Guinea, Suriname, and Guyana. Description Hymenocallis caribaea is a bulb-forming perennial. Leaves are up to 80 cm long. Umbel contains as many as 12 white flowers. Tepals are narrowly linear, up to 10 cm long, usually drooping at flowering time. Hymenocallis /ˌhaɪmᵻnəˈkælɪs/ (US) or /ˌhaɪmɛnoʊˈkælɪs/ (UK) is a genus of American plants in the amaryllis family. Hymenocalliscontains more than 60 species of herbaceous bulbous perennials native to the southeastern United States, Mexico, Central America, the Caribbean, and northern South America. Some species are cultivated as ornamentals in warm nations around the globe, and a few have become naturalized in parts of Africa and on various tropical islands.Many of the species from the Caribbean and from the southeastern United States inhabit wet areas such as marshes, streambanks, and seashores. Some species even have floating seeds. Some of the Mexican species, in contrast, grow on grassy slopes in hills and mountains. The flower stalks arise from basal rosettes of strap-shaped leaves. The terminal clusters of fragrant flowers are green, white or yellow, and can be large and spectacular. The genus name is derived from the Greek words ὑμήν (hymen), meaning "membrane", and καλός (kalos), meaning "beautiful". It refers to the curious shape of the flowers, which consist of six narrow, curved petals attached to a shallow cup that is formed from the fused stamens. The effect is of a spidery daffodil or lily, thus explaining the common name "spider lily". Taxonomy The genus Hymenocallis was created by Richard Anthony Salisbury in 1812, when he separated out a number of species formerly placed in Pancratium, starting with Hymenocallis littoralis. The main reason for the separation was that the fruits have only two seeds in each locule. Salisbury explained the name as referring to the "beautiful membrane which connects the filaments. Cultivation Most Hymenocallis must be grown in a warm greenhouse or in a sheltered sunny spot where the ground does not freeze. The North American species H. occidentalis is found as far north as southwestern Indiana where winters can reach 0 °F (−18 °C). They like good drainage and grow well in a soil rich with organic matter. The following species and hybrids are found in cultivation: H. amancaes H. caribaea H. harrisiana H. littoralis H. × macrostephana (H. narcissiflora × H. speciosa) &nbs