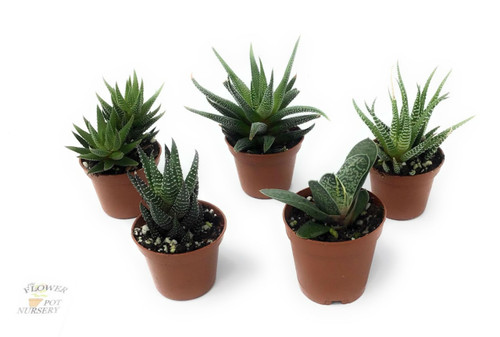 Haworthia is a large genus of small succulent plants endemic to Southern Africa (Mozambique, Namibia, Lesotho, Swaziland and South Africa). Like the aloes, they are members of the subfamily Asphodeloideae and they generally resemble miniature aloes, except in their flowers, which are distinctive in appearance. They are popular garden and container plants. Haworthias are small succulent plants, forming rosettes of leaves from 1.2 in to exceptionally 12 in in diameter, depending on the species. These rosettes are usually stemless but in some species stems reach up to 20 in. The inflorescences of some species may exceed 16 in in height. The plants can grow solitary or can be clump-forming. Many species have firm, tough, fleshy leaves, usually dark green in colour, whereas others are softer and contain leaf windows with translucent panels through which sunlight can reach internal photosynthetic tissues. Their flowers are small, and generally white. Though they are very similar between species, flowers from the species in hexangulares generally have green striations and those from other species often have brown lines in the flowers. However, their leaves show wide variations even within one species. Additionally, when the plants are stressed (e.g. deprived of water), their colours can change to reds and purples. Depriving them of nitrogen generally results in paler leaves. Give credit where credit is due: Wikipedia 2020