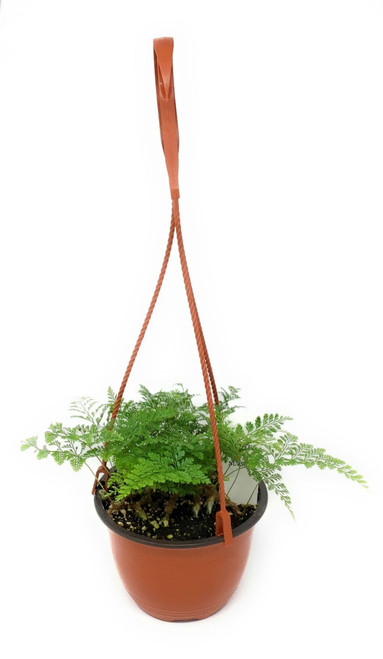 Davallia trichomanoides, also known as black rabbit's foot fern, is a fern in the family Davalliaceae which is found in Malaysia. Its height is from 15 to 45 cm. Partial or full shade is required for the growth of it. It can survive in dryness.

Davallia (deersfoot fern, hare's foot fern, shinobu fern, rabbit foot fern, ball fern) is a genus of about 40 species of fern. In the Pteridophyte Phylogeny Group classification of 2016 (PPG I), it is the only genus in the family Davalliaceae, which is placed in the suborder Polypodiineae, order Polypodiales. Alternatively, the family may be placed in a very broadly defined family Polypodiaceae sensu lato as the subfamily Davallioideae.

The family is sister to the largest family of ferns, Polypodiaceae, and shares some morphological characters with it. Species are epiphytic ferns, with fronds arising from long aerial rhizomes which grow on and over thick bark on trees or on rock crevices.