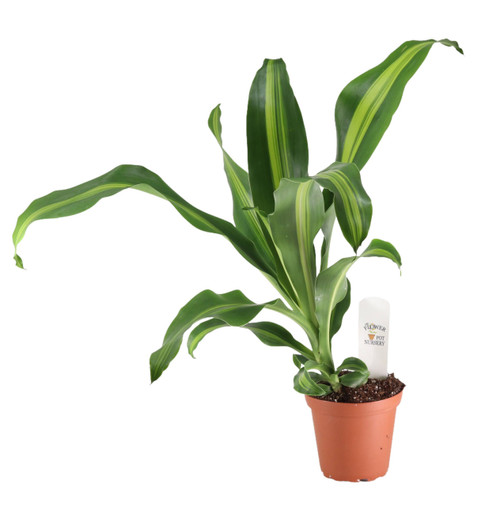 Dracaena fragrans (cornstalk dracaena), is a flowering plant species that is native throughout tropical Africa, from Sudan south to Mozambique, west to Côte d'Ivoire and southwest to Angola, growing in upland regions at 1,970-7,380 ft altitude.


Dracaena fragrans is a slow growing shrub, usually multistemmed at the base, mature specimens reaching 49 ft or more tall with a narrow crown of usually slender erect branches. Stems may reach up to 12 in diameter on old plants; in forest habitats they may become horizontal with erect side branches. Young plants have a single unbranched stem with a rosette of leaves until the growing tip flowers or is damaged, after which it branches, producing two or more new stems; thereafter, branching increases with subsequent flowering episodes.

The leaves are glossy green, lanceolate, 7.9-59.1 inches long and 0.79-4.72 inches wide; small leaves are erect to spreading, and larger leaves usually drooping under their weight. The flowers are produced in panicles 5.9-63.0 inches long, the individual flowers are 0.98 inches diameter, with a six-lobed corolla, pink at first, opening white with a fine red or purple central line on each of the 0.28-0.47 inches lobes; they are highly fragrant, and popular with pollinating insects. The fruit is an orange-red berry 0.39-0.79 inches diameter, containing several seeds.

In Africa, D. fragrans is commonly grown as a hedge plant. It is suited to frost-free climates and USDA Hardiness zones 10-11. Elsewhere, it is primarily popular as a houseplant and valued for its tolerance of a wide range of indoor conditions from full light to low light. It is also very tolerant of neglect. The NASA Clean Air Study indicated that the plant aided removal of indoor pollutants such as formaldehyde, xylene, and toluene. The plant is known as "masale" to the Chagga people of Tanzania, who regard it as holy.

In cultivation in the Neotropics, a few generalist hummingbird species like the sapphire-spangled emerald (Amazilia lactea) visit the flowers.

Several cultivars have variegated foliage. 'Massangeana', also commonly denominated "Mass Cane", has a bright yellow central stripe on the foliage. 'Compacta' is more compact and suitable for indoor cultivation. Other popular cultivars include 'Janet Craig', 'Lemon Lime', and 'Warneckei' ('Warneckii'), which are often sold under the synonym D. deremensis.

Dracaena fragrans is propagated by cutting segments of old stems 3.9-7.9 inches long, drying them, and then inserting them into moist sand until they root. New growth, typically being two or three shoots, comes from old foliar scars at the top of the stem.