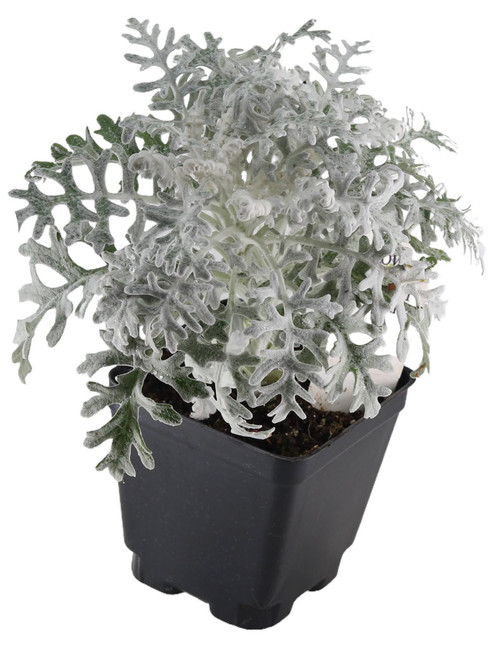 Jacobaea maritima, commonly known as silver ragwort, is a perennial plant species in the genus Jacobaea in the family Asteraceae, native to the Mediterranean region. It was formerly placed in the genus Senecio, and is still widely referred to as Senecio cineraria; see the list of synonyms (right) for other names.

It is widely cultivated as an ornamental plant for its white, felt-like tomentose leaves; in horticultural use, it is also sometimes called dusty miller, a name shared with several other plants that also have silvery tomentose leaves, including Centaurea cineraria and Silene coronaria.

Silver Ragwort is a very white-wooly, heat and drought tolerant evergreen subshrub growing to 0.5-1 m (1.6-3.3 ft) tall. The stems are stiff and woody at the base, densely branched, and covered in long, matted grey-white to white hairs. The leaves are pinnate or pinnatifid, 5-15 centimetres (2.0-5.9 in) long and 3-7 centimetres (1.2-2.8 in) broad, stiff, with oblong and obtuse segments, and like the stems, covered with long, thinly to thickly matted with grey-white to white hairs; the lower leaves are petiolate and more deeply lobed, the upper leaves sessile and less lobed.

The tomentum is thickest on the underside of the leaves, and can become worn off on the upper side, leaving the top surface glabrous with age. The flowers are yellow, daisy-like in dense capitula 12-15 millimetres (0.47-0.59 in) in diameter, with central disc florets surrounded by a ring of 10-13 ray florets, and enclosed in a common whorl of bracts at the base of the capitulum. The seeds are cylindrical achenes.