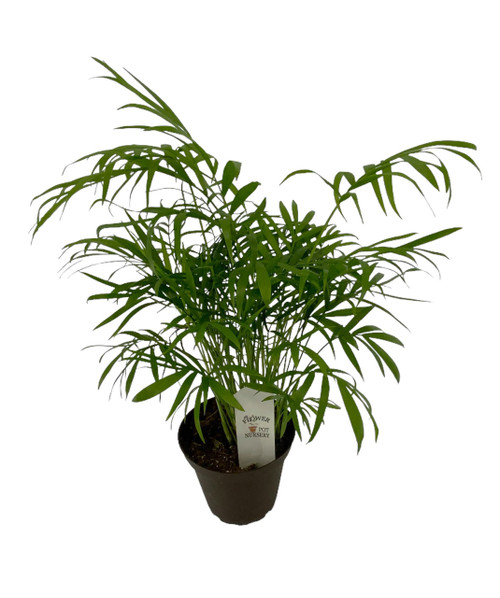 Chamaedorea elegans, the neanthe bella palm or parlour palm, is a species of small palm tree native to the rainforests in Southern Mexico and Guatemala. The parlor palm is one of the most heavily sold houseplant palms in the world. It is one of several species with leaves that are harvested as xate.

This plant has gained the Royal Horticultural Society's Award of Garden Merit.

A woody, rhizomatous plant with a slender green trunk, it is found in tropical areas and grows to 2-3 m (6 ft 7 in - 9 ft 10 in) tall (rarely to 4-5 m (13-16 ft). It has 1.2 centimetres (1⁄2 in)-long ringed stigma, punctured crescent-shaped leaves, erect buds, and flexible tubular stems without spines with generally pinnate foliage. The crown carries 3-10 long-leaf pinnate leaves (more when mature). A remarkable feature of this species is the early age of the onset of flowering, with some plants blooming with a height of only 30 centimetres (12 in).[10]

The small, light yellow, yellow, or orange-red odorous flowers appear on irregularly branched petioles that grow below or among the leaf. They emerge from the trunk as lateral buds and open in the form of clusters of small balls without petals. These have a certain resemblance to those of the mimosa. Occasionally, pea-sized berries develop after flowering, which are 6mm in diameter, and dark, collected in paniculate inflorescences.