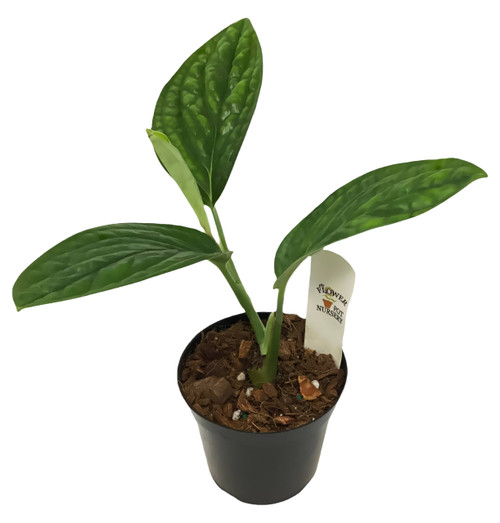 Monstera is a genus of 45 species of flowering plants in the arum family, Araceae, native to tropical regions of the Americas. The genus is named from the Latin word for "monstrous" or "abnormal", and refers to the unusual leaves with natural holes that members of the genus have.

They are herbs or evergreen vines, growing to heights of 66 ft in trees, climbing by means of aerial roots which act as hooks over branches; these roots will also grow into the soil to help support the plant. Since the plant roots both into the soil and over trees, it is considered a hemiepiphyte. The leaves are alternate, leathery, dark green, very large, from 51 in long in M. dubia and 5.9-29.5 in broad, often with holes in the leaf blade. The fenestrated leaves allow for the leaves to spread over a greater area to increase sunlight exposure, by using less energy to produce and maintain the leaves. The flowers are borne on a specialized inflorescence called a spadix, 2.0-17.7 in long; the fruit is a cluster of white berries, edible in some species.

They are commonly grown indoors as houseplants. The best-known representative of the genus, Monstera deliciosa, is also cultivated for its edible fruit which tastes like a combination of banana and pineapple.