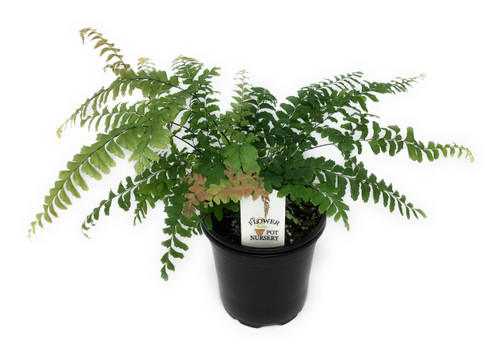 With its vibrant rosy red new fronds, Rosy Maidenhair Fern (Adiantum hispidulum) presents enthusiasts with a welcome and cheerful sight indoors or out. Its hand-shaped fronds are usually 12 to 18 inches tall, and imitate in diminutive form those of our native “five finger” maidenhair ferns. Its native range however is quite wide, spreading from New Zealand, Australia and Asia to the Hawaiian Islands where it is quite comfortable in warmish weather. It will tolerate more (but not full) sun than most maidenhairs but is still at its most magnificent in partial shade. The rosy maidenhair is rated for Zones 8 to 11 but will be borderline hardy (often waiting until mid-summer to surprise the grower with new fronds) in Zone 8. While it is deciduous outdoors, it remains evergreen indoors and is the easiest maidenhair for indoor decoration. Put it in an east or north window, keep it lightly moist but NOT over-watered or over-potted. Do, however, trim old fronds before new growth. The botanical species name hispidulum references the stiff hairs on the stipe that are readily apparent with a quick but gentle upward rub with your finger. Adiantum /ˌædiˈæntəm/, the walking fern or maidenhair fern, is a genus of about 200 species of ferns in the Vittarioideae subfamily of the family Pteridaceae, though some researchers place it in its own family, Adiantaceae. The genus name comes from Greek, meaning "not wetting", referring to the fronds' ability to shed water without becoming wet. They are distinctive in appearance, with dark, often black stipes and rachises, and bright green, often delicately cut leaf tissue. The sori are borne submarginally, and are covered by reflexed flaps of leaf tissue which resemble indusia. Dimorphism between sterile and fertile fronds is generally subtle. They generally prefer humus-rich, moist, well-drained sites, ranging from bottomland soils to vertical rock walls. Many species are especially known for growing on rock walls around waterfalls and water seepage areas. The highest species diversity is in the Andes. Fairly high diversity also occurs in eastern Asia, with nearly 40 species in China. Species native to North America include A. pedatum (five-fingered fern) and the closely related A. aleuticum, which are distinctive in having a bifurcating frond that radiates pinnae on one side only. A. capillus-veneris (Venus-hair fern) has a native distribution that extends into the eastern continent. A. jordanii (California Maidenhair) is native to the west coast. There is a rich Adiantum flora in New Zealand with 3 endemic species (A. cunninghamii, A. viridescens and A. fulvum) in a total of 10 recorded species. Many of these are common especially in the west and south of the islands. Give credit where credit is due: Wikipedia 2020