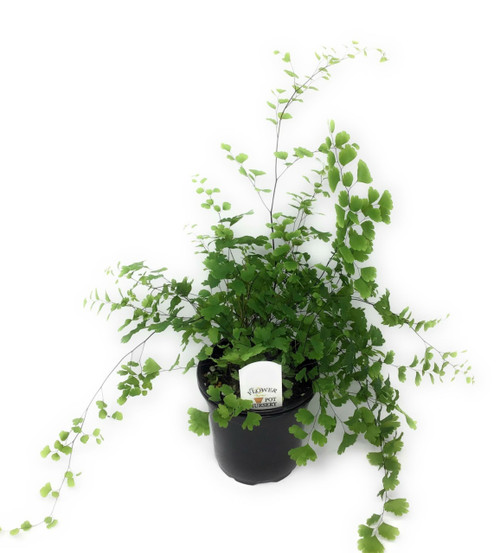 Adiantum X Mairisii Mairis’s Hardy Maidenhair Fern (Adiantum x mairisii), is a sterile hybrid between Adiantum capillus-veneris and an unknown presumed tropical maidenhair (A. raddianum or A. aethiopicum). Discovered ages ago in the British nursery of Mairis and Company and named before 1885, it rewards gardeners with typical hybrid vigor and surprising hardiness (better than either of its likely parents). Mairis’s maidenhair produces lacy, bright green 15″to 18″ fronds supported by brittle blackish stipes (stems). While it is deciduous, it holds its fronds well into the fall season. This exciting woodlander spreads with ease through the landscape in light moist soil and filtered shade. In spite of its age it is relatively new to North American cultivation and is a rewarding addition for enthusiasts in Zones 7 to 10. Adiantum /ˌædiˈæntəm/, the walking fern or maidenhair fern, is a genus of about 200 species of ferns in the Vittarioideae subfamily of the family Pteridaceae, though some researchers place it in its own family, Adiantaceae. The genus name comes from Greek, meaning "not wetting", referring to the fronds' ability to shed water without becoming wet. They are distinctive in appearance, with dark, often black stipes and rachises, and bright green, often delicately cut leaf tissue. The sori are borne submarginally, and are covered by reflexed flaps of leaf tissue which resemble indusia. Dimorphism between sterile and fertile fronds is generally subtle. They generally prefer humus-rich, moist, well-drained sites, ranging from bottomland soils to vertical rock walls. Many species are especially known for growing on rock walls around waterfalls and water seepage areas. The highest species diversity is in the Andes. Fairly high diversity also occurs in eastern Asia, with nearly 40 species in China. Species native to North America include A. pedatum (five-fingered fern) and the closely related A. aleuticum, which are distinctive in having a bifurcating frond that radiates pinnae on one side only. A. capillus-veneris (Venus-hair fern) has a native distribution that extends into the eastern continent. A. jordanii (California Maidenhair) is native to the west coast. There is a rich Adiantum flora in New Zealand with 3 endemic species (A. cunninghamii, A. viridescens and A. fulvum) in a total of 10 recorded species. Many of these are common especially in the west and south of the islands. It is now known that this genus is paraphyletic, and that the vittarioid ferns are derived from this larger paraphyletic genus. However, if A. raddianum, and possibly a few other species, are removed, the remaining plants (genus type: Adiantum capillus-veneris).