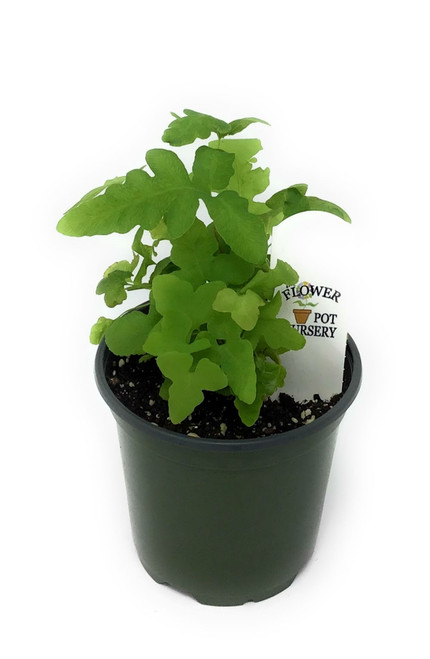 Onoclea sensibilis, the sensitive fern, also known as the bead fern, is a coarse-textured, medium to large-sized deciduous perennial fern. The name comes from the observation by early American settlers that it was very sensitive to frost, the fronds dying quickly when first touched by it. It is sometimes treated as the only species in Onoclea, but some authors do not consider the genus monotypic.

The sterile and fertile fronds of Onoclea sensibilis are quite different from other ferns. The bright, yellow-green sterile fronds are deeply pinnatifid and are typically borne at intervals along a creeping rhizome. They grow to about 35 inches long, with a long, smooth stipe.

The fertile fronds are much smaller, non-green, and have very narrow pinnae. The sori are clustered like beads or grapes on the upright fertile fronds, hence the common name Bead fern. The fiddleheads are a pale red color.

Onoclea sensibilis is native to the Russian Far East, China and Eastern Asia, and has a wide native distribution in Northern America.

Onoclea sensibilis dwells in a variety of wet swamp and wood habitats: wet meadows, thickets and bogs, as well as stream and riverbanks and roadside ditches. It ranges from Newfoundland south to Florida and west to Texas, the Rocky Mountains, North Dakota, Quebec, and Manitoba. It is also native to East Asia, and has become naturalized in western Europe.

It grows best in a shaded or partially shaded area in a moist soil. The plant can tolerate dryer conditions in shade, and will tolerate wet soils and so occurs in soggy ground or at the very edge of water in shade or sun. Sensitive ferns spread to form colonies and are often the first species to inhabit disturbed areas. They can become weedy if not sited properly.

Onoclea sensibilis is a facultative wetland indicator and a host to the pathogen which causes bacterial wilt in rice.