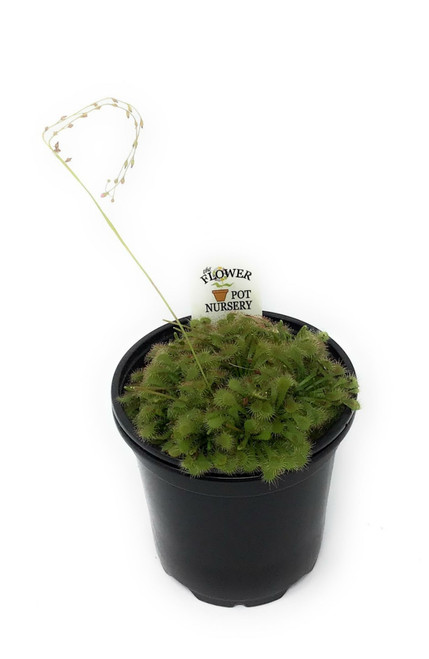 Drosera spatulata, the spoon-leaved sundew, is a variable, rosette-forming sundew with spoon-shaped leaves. The specific epithet is Latin for "spatula shaped," a reference to the form of the leaves. This sundew has a large range and occurs naturally throughout Southeast Asia, in southern China and Japan, Micronesia, New Guinea through to the eastern territories of Australia and Tasmania and New Zealand. Variants are often known by the localities in which they are found. The plant does not form hibernacula in winter, and is easily grown using the same methods as Drosera capensis. Drosera spatulata is a variable perennial plant that produces small rosettes of numerous spathulate leaves. This species is widely variable, but generally plants are about 1.6 in in diameter. Each leaf is attached to the central rosette by a narrow 8 mm long petiole that is only glandular on the upper half. Individual leaf laminae are typically 5 mm long and 4 mm wide. In early summer, plants will produce 3.1 in tall erect scapes with around six small white or pink flowers on each one-sided racemose inflorescence. Each flower can be up to 6 mm across. Give credit where credit is due: Wikipedia 2020