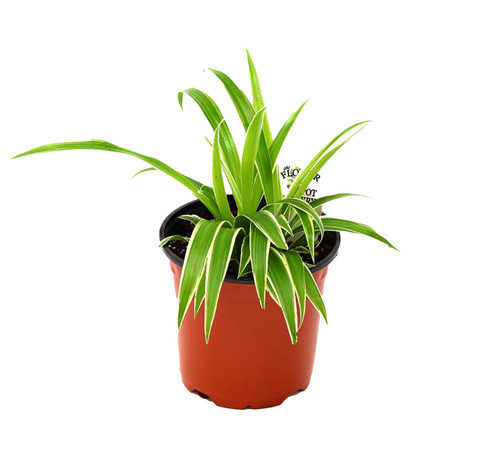 Chlorophytum comosum, often called spider plant but also known as airplane plant, St. Bernard's lily, spider ivy, ribbon plant, and hen and chickens is a species of perennial flowering plant. It is native to tropical and southern Africa, but has become naturalized in other parts of the world, including western Australia. Chlorophytum comosum is easy to grow as a houseplant; variegated forms are the most popular.

Chlorophytum comosum grows to about 24 in tall. It has fleshy, tuberous roots, each about 2-4 in long. The long narrow leaves reach a length of 8-18 in and are around 0.2-1.0 in wide.

Individual flowers are greenish-white, borne on stalks (pedicels) some 0.2-0.3 in long. Each flower has six triply veined tepals which are 0.2-0.4 in long and slightly hooded or boat-shaped at their tips. The stamens consist of a pollen-producing anther about 0.1 in long with a filament of similar length or slightly longer. The central style is 0.1-0.3 in long. Seeds are produced in a capsule, 0.1-0.3 in long, on stalks (pedicels) which lengthen to up to 0.5 in.

The inflorescences carry plantlets at the tips of their branches, which eventually droop and touch the soil, developing adventitious roots. The stems (scapes) of the inflorescence are called "stolons" in some sources, but this term is more correctly used for stems which do not bear flowers and have roots at the nodes.