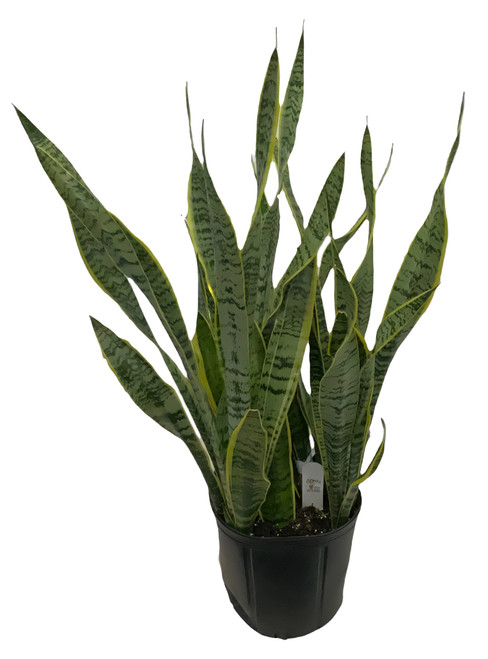 Sansevieria is a historically recognized genus of flowering plants, native to Africa, notably Madagascar, and southern Asia, now included in the genus Dracaena on the basis of molecular phylogenetic studies. Common names for the 70 or so species formerly placed in the genus include mother-in-law's tongue, devil's tongue, jinn's tongue, bow string hemp, snake plant and snake tongue. In the APG III classification system, Dracaena is placed in the family Asparagaceae, subfamily Nolinoideae (formerly the family Ruscaceae). It has also been placed in the former family Dracaenaceae.

The leaves of former Sansevieria species are typically arranged in a rosette around the growing point, although some species are distichous. There is a great variation in foliage form. All former species can be divided into one of two basic categories based on their leaves: hard leaved and soft-leaved species. Typically, hard-leaved species originate from arid climates, while soft-leaved species originate from tropical and subtropical regions. Hard leaved species have a number of adaptations for surviving dry regions. These include thick, succulent leaves for storing water and thick leaf cuticles for reducing moisture loss. These leaves may be cylindrical to reduce surface area and are generally shorter than those of their soft leafed tropical counterparts, which are wide and strap-like.
The flowers of former Sansevieria species are usually greenish-white, also rose, lilac-red, brownish, produced on a simple or branched raceme. The fruit is a red or orange berry. In nature, they are pollinated by moths, but both flowering and fruiting are erratic and few seeds are produced. The raceme is derived from the apical meristem, and a flowered shoot will no longer produce new leaves. Unlike plants such as agave which die after flowering, a bloomed shoot will simply cease to produce new leaves. The flowered shoot continues to grow by producing plantlets via its rhizomes or stolons.