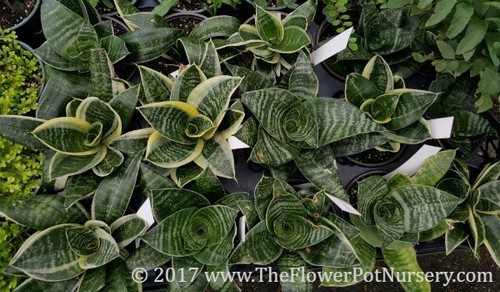 Sansevieria is a genus of about 70 species of flowering plants, native to Africa, Madagascar and southern Asia. Common names include mother-in-law's tongue, devil's tongue, jinn's tongue, bow string hemp, snake plant and snake tongue. It is often included in the genus Dracaena; in the APG III classification system, both genera are placed in the family Asparagaceae, subfamily Nolinoideae (formerly the family Ruscaceae). It has also been placed in the former family Dracaenaceae.Etymology

The genus was originally named Sanseverinia by Petagna to honor his patron Pietro Antonio Sanseverino, Count of Chiaromonte (1724-1771), but the name was altered for unknown reasons by Thunberg, possibly influenced by the name of Raimondo di Sangro (1710–1771), prince of San Severo in Italy. Spellings "Sanseveria" and "Sanseviera" are commonly seen as well, the confusion deriving from alternate spellings of the Italian place name.Characteristics

The leaves of Sansevieria are typically arranged in a rosette around the growing point, although some species are distichous. There is great variation in foliage form within the genus. All species can be divided into one of two basic categories based on their leaves: hard leaved and soft leaved species. Typically, hard leaved Sansevieria originate from arid climates, while the soft leaved species originate from tropical and subtropical regions. Hard leaved Sansevieria have a number of adaptations for surviving dry regions. These include thick, succulent leaves for storing water and thick leaf cuticles for reducing moisture loss. These leaves may be cylindrical to reduce surface area and are generally shorter than those of their soft leafed tropical counterparts, which are wide and strap-like.FlowersThe flowers are usually greenish-white, also rose, lilac-red, brownish, produced on a simple or branched raceme. The fruit is a red or orange berry. In nature, Sansevieria flowers are pollinated by moths, but both flowering and fruiting is erratic and few seeds are produced. The raceme of Sansevieria is derived from the apical meristem and a flowered shoot will no longer produce new leaves. Unlike plants such as agave which die after flowering, a bloomed Sansevieria shoot will simply cease to produce new leaves. The flowered shoot continues to grow by producing plantlets via its rhizomes or stolons.Propagation

Sansevieria can be propagated by seed, leaf cutting, and division. Seeds are rarely used, as plants can normally be grown much faster from cuttings or divisions. As many cultivars are periclinal chimeras they don't propagate true to type from leaf cuttings, and therefore must be propagated by rhizome division to retain the variegation.Uses

A variegated cultivar of Sansevieria trifasciata (namely 'Laurentii'), the most common species in cultivationSeveral species are popular houseplants in temperate regions, with Sansevieria trifasciata the most widely sold; numerous cultivars are available. In China, the plant is usually kept potted in a pot often ornamented with dragons and phoenixes. Growth is comparatively slow and the plant will last for many years. The tall-growing plants have stiff, erect, lance-shaped leaves while the dwarf plants grow in rosettes. As houseplants, Sansevieria thrive on warmth and bright light, but will also tolerate shade. They can rot from over-watering, so it is important that they are potted in well-drained soil, and not over-watered. They need to be re-potted or split at the root from time to time because they will sometimes grow so large that they break the pot they are growing in.In Korea, potted Sansevieria is commonly presented as a gift during opening ceremonies of businesses or other auspicious events. In Barbados, Sansevieria is also popularly referred to as the "money plant", with the belief that the person having it will always have money. The belief seems to be based on an association of the colour (green) with the US bills.Other Sansevieria species are less common in cultivation. Another species is Sansevieria cylindrica, which has leaves which look quite different from S. trifasciata, but is equally tough.Scenery in film and television

Sansevieria is frequently used in many films and TV shows, and has been a popular set decoration since at least the 1980s.Air purification

According to a NASA Clean Air Study, along with other plants such as golden pothos (Epipremnum aureum) and corn plant (Dracaena fragrans), Sansevieria trifasciata is capable of purifying air by removing some toxins such as formaldehyde, xylene, and toluene.  Sansevieria use the crassulacean acid metabolism process, which absorbs carbon dioxide and releases oxygen at night. This purportedly makes them suitable bedroom plants. However, since the leaves are potentially poisonous if ingested, Sansevieria is not usually recommended for children's bedrooms.Feng shui

According to feng shui, because the leaves of Sansevieria grow upwards. the plants can be used for feng shui purposes. Some believe that having Sansevieria near children helps reduce coarseness, although care must be taken to ensure the child cannot reach the plant's poisonous leaves. Others recommend placing pots near the toilet tank to counter the drain-down vibrations. Such placement appears in the 1986 film Blue Velvet.