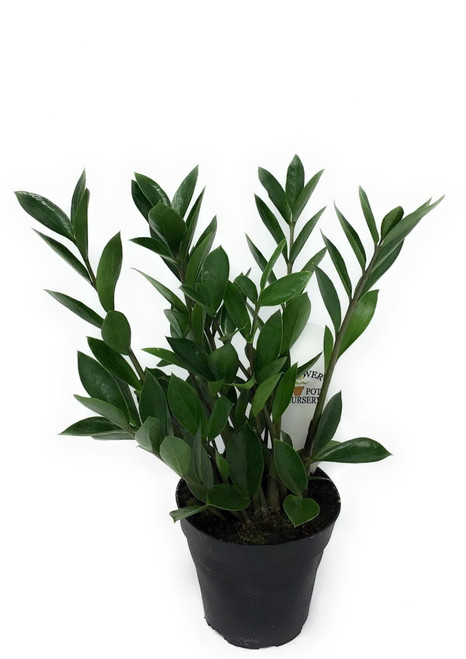 Dutch nurseries started wide-scale commercial propagation of the plant around 1996. It was first described as Caladium zamiifolium by Loddiges in 1829, moved to his new genus Zamioculcas by Heinrich Wilhelm Schott and given its established name Zamioculcas zamiifolia by Adolf Engler.

The botanical name derives from on the one hand the superficial similarity of its foliage to that of the cycad genus Zamia and on the other hand its kinship to the genus Colocasia, whose name comes from a word culcas or colcas in a Middle Eastern language of antiquity and which is named qolqas (Egyptian Arabic: قلقاس‎, IPA: [ʔolˈʔæːs]) in Arabic. Botanical synonyms include Caladium zamiaefolium, Zamioculcas loddigesii and Z. lanceolata.

It is a herbaceous plant growing to 17.7–23.6 in tall, from a stout underground, succulent rhizome. It is normally evergreen, but becomes deciduous during drought, surviving drought due to the large potato-like rhizome that stores water until rainfall resumes. The leaves are pinnate, 15.7–23.6 in long, with 6–8 pairs of leaflets 2.8–5.9 in long; they are smooth, shiny, and dark green. The stems of these pinnate leaves are thickened at the bottom.

The flowers are produced in a small bright yellow to brown or bronze spadix 2.0–2.8 in long, partly hidden among the leaf bases; flowering is from mid summer to early autumn.

Zamioculcas zamiifolia contains an unusually high water contents of leaves (91%) and petioles (95%) and has an individual leaf longevity of at least six months, which may be the reason it can survive extremely well under interior low light levels for four months without water.