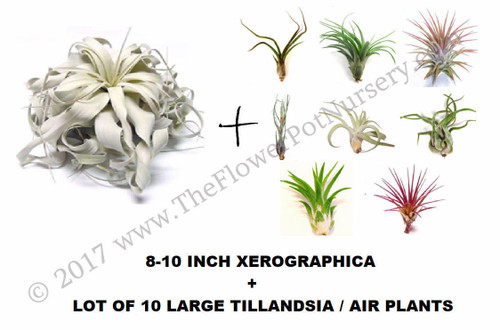 This listing is for one large 8- 10 inch Xerographica and 10 large assorted Tillandsia species. The plants you receive are the ones in the photos above or ones similar in size and shape. The assorted tillandsia size varies from 4 - 9 inches making these large premium Tillandsia.

This listing is for the following varieties:

You will receive one 8-10 inch large Xerographica and 10 assorted varieties including at least 7 of the 8 varieties listed above. That is SEVEN DIFFERENT SPECIES OF TILLANDSIA PLUS A LARGE XEROGRAPHICA!

Your order will also include a photo document with species/varieties for identification of your new Tillandsia species as well as a flowering identification document.