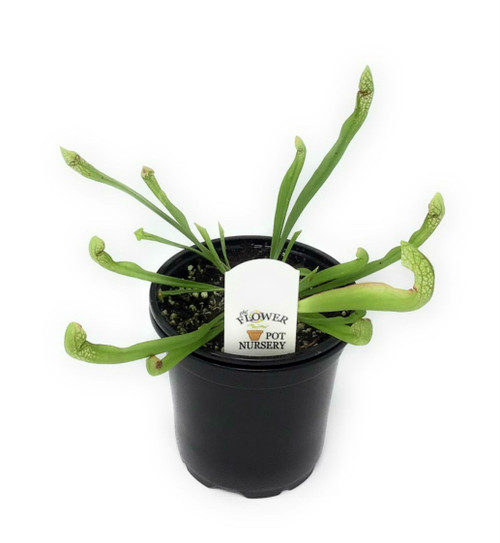 Sarracenia is a genus comprising 8 to 11 species of North American pitcher plants, commonly called trumpet pitchers. The genus belongs to the family Sarraceniaceae, which also contain the closely allied genera Darlingtonia and Heliamphora.

Sarracenia is a genus of carnivorous plants indigenous to the eastern seaboard of the United States, Texas, the Great Lakes area and southeastern Canada, with most species occurring only in the south-east United States (only S. purpurea occurs in cold-temperate regions). The plant's leaves have evolved into a funnel or pitcher shape in order to trap insects.

The plant attracts its insect prey with secretions from extrafloral nectaries on the lip of the pitcher leaves, as well as a combination of the leaves' color and scent. Slippery footing at the pitcher's rim, causes insects to fall inside, where they die and are digested by the plant with proteases and other enzymes.

Sarracenia are herbaceous perennial plants that grow from a subterranean rhizome, with many tubular pitcher-shaped leaves radiating out from the growing point, and then turning upwards with their trap openings facing the center of the crown. The trap is a vertical tube with a 'hood' (the operculum) extending over its entrance; and below it the top of the tube usually has a rolled lip (the peristome) which secretes nectar and scents. The hood itself frequently produces nectar too, but in lesser quantities.