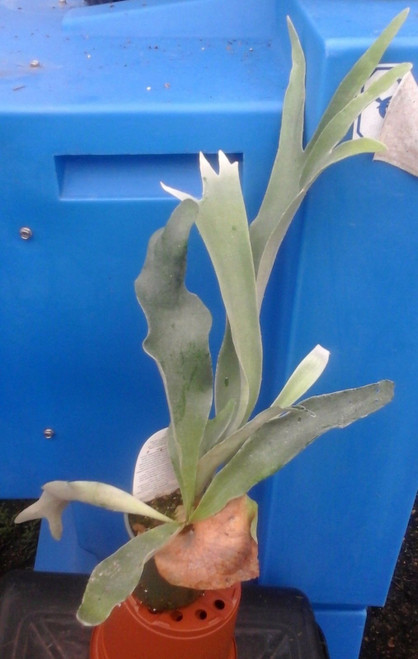 Platycerium is a genus of about 18 fern species in the polypod family, Polypodiaceae. Ferns in this genus are widely known as staghorn or elkhorn ferns due to their uniquely shaped fronds. This genus is epiphytic and is native to tropical and temperate areas of South America, Africa, Southeast Asia, Australia, and New Guinea.

Platycerium sporophytes (adult plants) have tufted roots growing from a short rhizome that bears two types of fronds, basal and fertile fronds. Basal fronds are sterile, shield or kidney shaped and laminate against the tree and protect the fern's roots from damage and desiccation. In some Platycerium species the top margin of these fronds forms an open crown of lobes and thereby catches falling forest litter and water.

Fertile fronds bear spores on their undersurface, are dichotomous or antler shaped and jut out or hang from the rhizome. The spores are born in sporangia clustered in large sori that are usually positioned on the lobes or at the sinus between frond lobes.

Some species of Platycerium are solitary having only one rhizome. Other species form colonies when their rhizomes branch or when new rhizomes are formed from root tips. If the conditions are right the spores will germinate naturally on surrounding trees. Platycerium gametophytes are a small heart-shaped thallus.

Platycerium have diverged into four natural groups. Several Platycerium are strongly adapted to xeric conditions and the drought tolerating mechanism Crassulacean Acid Metabolism has been reported for P. veitchii.

The species Platycerium bifurcatum and Platycerium superbum are commonly cultivated as ornamental plants. These oddly shaped ferns grow on trees and rocks and can be found in gardens, especially tropical gardens.

Staghorns can be propagated by spores produced on the underside of the fertile fronds. Colonial Platycerium can also be vegetatively propagated by carefully dividing large healthy ones into smaller, separate plants. These new plants can then be attached to board mounts or be strapped to trees until they take to the tree themselves.

Staghorns are native to tropical areas where they grow on tree trunks and take their nutrients from the dust in the air and from leaves and twigs, which fall into their root mass and compost into nutrients. This hybrid is one of the most popular cultivated. Its fronds are arching grayish green and lobed. They are the most commonly used where they are mounted on wooden plaques and attached to walls or trees or as multiple plants grouped in wooden or wire baskets. While they are small they can be used as 4 or 6 inch pot plants before installing them on p